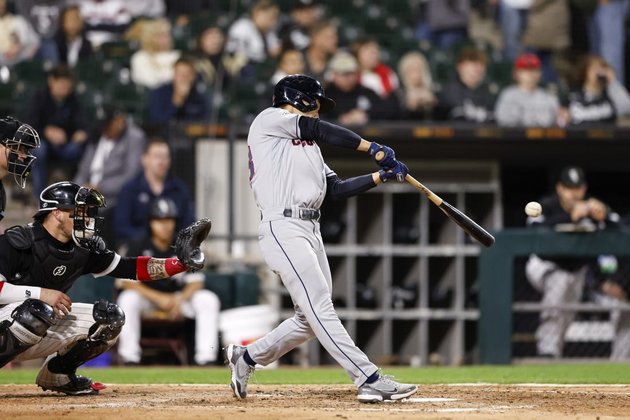 Shane Bieber tossed 7 2/3 strong innings to win his fourth straight start and fuel the streaking Cleveland Guardians to a 4-2 victory over the host Chicago White Sox on Thursday to complete a three-game series sweep.

Bieber (12-8) allowed two runs on seven hits to improve to 8-2 in his past 11 outings. He struck out five without issuing a walk.

Jose Ramirez drove in two runs and rookie Steven Kwan had an RBI triple for the Guardians, who have won 13 of their past 15 games.

Gavin Sheets homered to lead off the eighth inning and Eloy Jimenez had an RBI single for the White Sox.

The teams each scored a run in the first inning before Cleveland seized the lead for good in the third.

Amed Rosario opened the third with an infield single and advanced to third base on a failed pickoff attempt by Johnny Cueto (7-9). Rosario came home on a Ramirez's sacrifice fly to right field.

The Guardians added to their advantage in the fifth inning.

Myles Straw led off the with a single and scored on Kwan's triple to right-center field. Kwan didn't stay on third base for long, as he scored on Ramirez's sacrifice fly to left field to give Cleveland a 4-1 lead.

Cueto fell to 5-1 in his career vs. Cleveland after permitting four runs (three earned) on eight hits in six innings. He fanned three and walked one.

Sheets deposited a 1-1 cutter from Bieber over the wall in right field to trim the Guardians' lead to 4-2 in the eighth inning. The homer was Sheets' 14th of the season and second this month.

After Chicago's Yoan Moncada doubled with two outs in the eighth, Trevor Stephan replaced Bieber and struck out Jose Abreu to end the inning. Emmanuel Clase retired the side in order in the ninth to secure his 37th save of the season.

Cleveland opened the scoring in the top of the first on three consecutive two-out singles. Gimenez's bunt rolled just out of Cueto's reach, allowing Ramirez to cross the plate.

Chicago answered in the bottom of the frame after Abreu ripped a two-out double before coming home on Jimenez's single to left field.

WASHINGTON D.C.: The Biden Administration and the Australian government are in discussions regarding the U.S. building the island nation's first ...

OTTAWA, Canada: Canada has appointed Jennifer May as its first female ambassador to China, taking over a role that has ...

WASHINGTON D.C.: In the past three weeks, the latest campaign to offer a second Covid booster shot has seen 4.4 ...

MOSCOW, Russia: Employees at Russian airlines and airports have begun receiving army draft orders, as reported this week by the ...

School children gunned down by ex-student at school in Russia

MOSCOW, Russia - At least fifteen people, including 11 pupils, have been killed in a mass shooting at a school ...

LUCKNOW, India: Thirty-six people, including 12 struck by lightning, have been killed in northern India over the past 24 hours, ...

Chicago interim manager Miguel Cairo tore into the White Sox's effort after they finished an 0-6 homestand with a lackluster ...

The Milwaukee Brewers will turn to right-hander Brandon Woodruff as they continue their wild-card chase while closing out a two-game ...

Bucking his own personal history, Aaron Nola has enjoyed September success this season, helping the Philadelphia Phillies remain in position ...

Mets feel heat ahead of finale vs. Marlins

With eight days left in the season, the New York Mets are bound for the playoffs and in a tie ...

Miles Mikolas allowed one run over six innings and Andrew Knizner had a two-run homer as the visiting St. Louis ...

News of the World