Snowline Gold Intersects 3.96 G/T Gold Over 7.05 Metres and 4.10 G/T Gold Over 4.00 Metres in Initial Drill Results From Its Jupiter Zone

VANCOUVER, BC / ACCESSWIRE / July 27, 2021 / SNOWLINE GOLD CORP. (CSE:SGD) (OTCQB:SNWGF) (the 'Company' or 'Snowline') is pleased to announce it has intersected 7.05 metres at 3.96 g/t Au, including 0.7 metres at 10.65 g/t Au, and 4.00 metres at 4.10 g/t Au, including 0.5 metres at 17.95 g/t Au in initial drill program at the Jupiter Zone on its Einarson project in the Yukon Territory, Canada. Assays from hole J-21-006 & 007 confirm the presence of near-surface gold mineralization along a covered, regional scale structure. The Company has intersected mineralization associated with this structure in all 15 holes drilled to date. Step-out drill holes up to 930 metres along the trend continue to hit mineralization, with even wider mineralized intervals than those reported here for J-21-006 & 007 (Figure 1). Assay results are pending.

'This blind discovery at the Jupiter Zone in our first-ever drill campaign is a remarkable achievement for the Snowline geology team', said Nikolas Matysek, Director and CEO. 'We have consistently intersected mineralization in all 15 holes drilled to date and these initial assay results are a strong indication of the high-grade gold potential at Jupiter. The programme will now focus on extending the yet unknown limits of this structure with immediate follow up drilling.'

In hole J-21-006, a significant mineralized zone was intercepted between 41.2 - 48.3 metres within a 15-metre highly deformed and fractured fault zone (Figure 2). This zone is characterized by disseminated to locally massive arsenopyrite & pyrite within siltstone overlying a mineralized faulted vein. Holes J-21-005 and J-21-008 were drilled from the same pad, with assay results pending (Table 1).

A 710 metre along-strike step-out to the south for holes J-21-010, 011, 012 and 013 brings the total tested strike length to 930 metres and demonstrates the potential scale of the mineralized system at Jupiter (Figures 1, 3 & 4). Holes J-21-010 and J-21-011 encountered localized zones of disseminated and vein-hosted arsenopyrite mineralization along 121.2 metres and 133.9 metres of core length, respectively. Hole J-21-013 was drilled from the same pad but oriented away from the main target area at 090 azimuth degrees, and nonetheless also encountered zones of arsenopyrite mineralization thought to be associated with gold. True widths and the relationships of these broader intervals to any potential mineralized body or bodies is not yet known, nor is the continuity of the mineral system between northern holes and the southern drilling step-out. The Company believes these results to be highly encouraging evidence of a large, robust mineralizing system, but it cautions that their true significance awaits assay results. 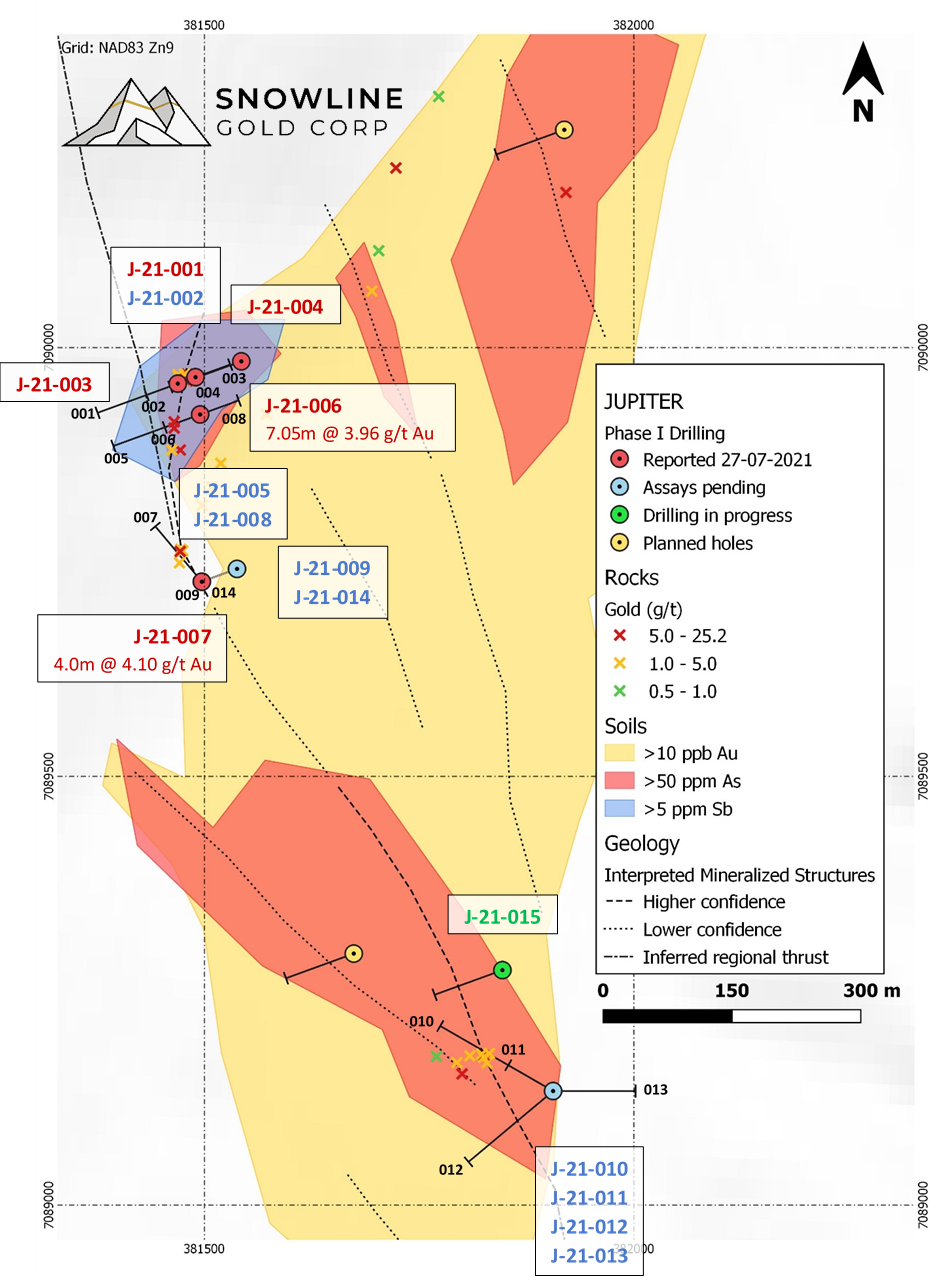 Figure 1- Schematic geochemistry and structural map showing drill hole locations for Phase I drilling at Jupiter. The scope of this initial phase has been expanded based on positive results. 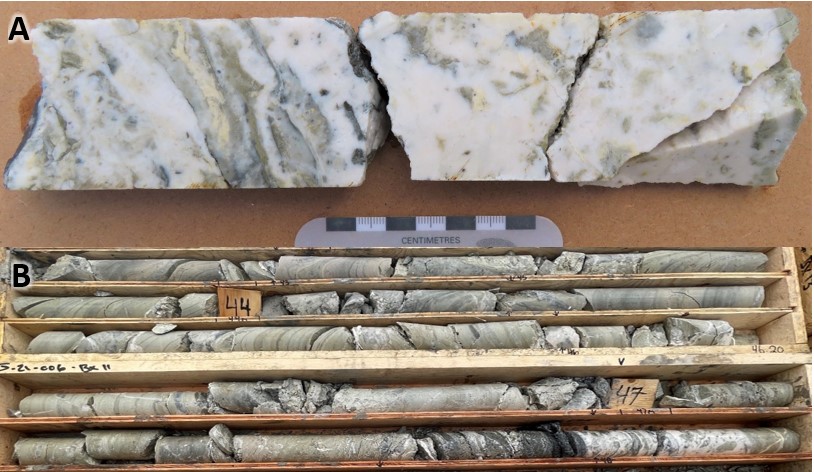 The Jupiter property is thought to host a shallow epizonal orogenic gold system. It is one of eight target zones prospective for orogenic and/or Carlin-style gold mineralization currently recognized on Snowline Gold's 70%-owned Einarson project.

Figure 4 - Quartz flooding with abundant arsenopyrite in patches, veinlets and stylolites, from roughly 56 m to 62 m downhole in J-21-011. Assays for this and other mineralized zones in J-21-011 are pending.

Table 1 - Drill assay results received to date from the Jupiter zone at Einarson. Select zones were sent for rushed assay based on arsenopyrite and quartz content observed in core. True widths are not known, but based on angles to core axis they are generally believed to represent a substantial portion (>75%) of downhole intervals. The company awaits complete assay results for sampled portions of these holes. All assay results from holes 008 through 014, which appear to have intersected more substantial zones of mineralization than holes 001 through 007, are still pending.

ON BEHALF OF THE BOARD

This news release contains certain forward-looking statements, including statements about the Company reviewing its newly acquired project portfolio to maximize value, reviewing options for its non-core assets, including targeted exploration and joint venture arrangements, conducting follow-up prospecting and mapping this summer and plans for exploring and expanding a new greenfield, district-scale gold system. Wherever possible, words such as 'may', 'will', 'should', 'could', 'expect', 'plan', 'intend', 'anticipate', 'believe', 'estimate', 'predict' or 'potential' or the negative or other variations of these words, or similar words or phrases, have been used to identify these forward-looking statements. These statements reflect management's current beliefs and are based on information currently available to management as at the date hereof. 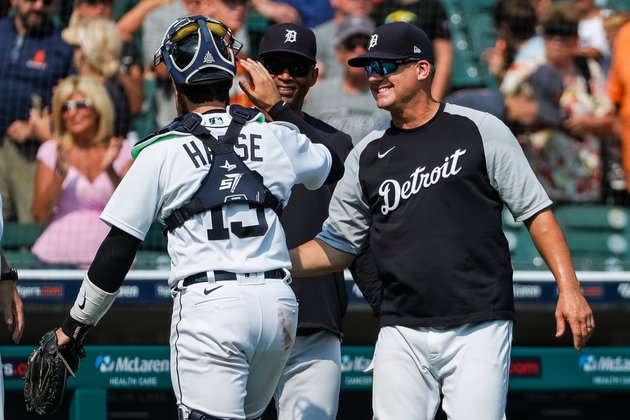 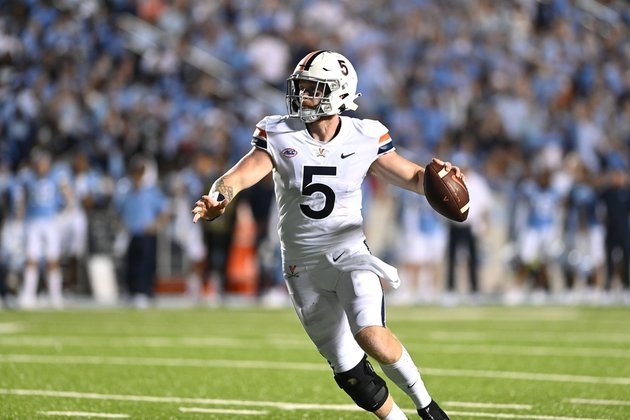