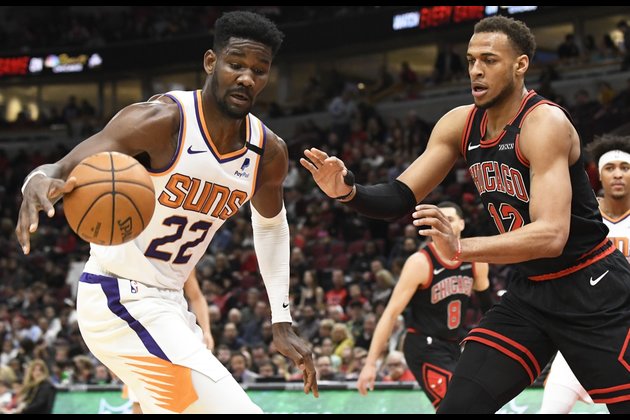 Behind 28 points and 19 rebounds from Deandre Ayton, the Phoenix Suns rallied from down 10 points at halftime to beat the Chicago Bulls, 112-104, Saturday at the United Center.

Chicago led by as many as 17 points in the second quarter. Coby White came off the bench to set the pace, finishing with a career-high 33 points.

But the Suns chipped away before halftime then set the tone for the second half immediately out of the locker room by scoring the third quarter's first 13 points.

A 10-point deficit became a three-point lead in less than four minutes.

Phoenix took its first lead since the first quarter when Devin Booker knocked down a 3-pointer, one of the five he made on the night en route to a team-high 29 points. Booker also grabbed five rebounds and dished five assists.

With Booker operating on the perimeter, and Ayton dominating on the interior -- a performance that included 10 offensive rebounds -- the Suns outscored the Bulls in the second half, 65-47.

Ricky Rubio flirted with a triple-double for Phoenix with 18 points, 11 assists and seven rebounds. His seven boards were second to Ayton's 19, and contributed to Phoenix's total 47-38 edge on the glass.

Phoenix held Chicago to 43.4 percent shooting from the floor, though the Bulls finished 36.8 percent from behind the 3-point arc. White's 7-of-13 performance led the way, with Thaddeus Young going 3-of-5 from deep en route to 13 points.

Zach LaVine scored 20 points for the Bulls, but shot just 8-of-20 from the floor and 2-of-8 from behind the arc. LaVine finished with a team-high five assists, but committed another team-high with seven turnovers.

The Sun forced the Bulls into 26 turnovers overall.